A 2000 km round trip, over 7 nights through the beautiful Wild Coast, staying at the Storm’s River Mouth Rest Camp in the Tsitsikamma section of the Garden Route National Park for our first night.

What an awesome place, with log cabins and camp sites right on the ocean, and a must do is a hike to the pedestrian suspension bridge over the mouth of the Storm’s River itself. Storm’s River Mouth Rest Camp is part of the larger Garden Route National Park, that stretches between Wilderness, Knysna and Tsitsikamma. It’s not one continuous park like most, but it encompasses some of the most naturally beautiful parts of the South African coastline.

We stayed in a Forest Cabin, overlooking the ocean, they are fully equipped with everything you need and did I mention those views? The rest camp has a variety of accommodation options, as well as camping, right on the water’s edge. There’s also a shop and a Cattle Baron restaurant.

Morgan Bay is about 100km past East London and is very close to the mouth of the Kei River, which marks the southern limit of the Wild Cost proper. A really pleasant town with friendly people, awesome views and a spectacular hike along the cliffs on the edge of the village. A short ferry ride across the Kei River and we were in rural South Africa where cows have right of way and life is synched to a much slower pace.

Our accommodation was at the Mitford Hotel, it’s a little dated, but comfortable enough and clean. There’s also a restaurant and pub, and it’s in an ideal spot right next to the beach.

The road the Coffee Bay ranges from excellent on the N2 national route, to pretty awful once you get off the main roads. Loads of potholes, unmarked speed humps and an assortment of domestic animals wandering around. Coffee Bay itself is a strange place, there are no “facilities” as such, no shops other than spaza shops, some basic back packers and pizza joints, but we managed to find a decent guesthouse, Coram Deo, which was awesome.

The village is spoilt by the abundance of rubbish lining the streets, and even beaches, locals told us that the local municipality has long since ceased to function. Which is a pity, because it has so much potential.

Hole in The Wall

The Hole in The Wall is a must visit, we were told that the road was terrible and only passable in a 4×4. Which is incorrect, there is maintenance on the go and it can be done in a normal car. The informal “guides” can be a problem, I found that a firm but friendly approach was the way to go.

It’s a short walk, mostly along the beach, from the Hole in The Wall Hotel, where we parked, to the river mouth. The Hole in The Wall itself is a giant opening carved through the centre of a cliff by the relentless pounding of the waves. The local Xhosa call the place “iziKhaleni”, which means “place of thunder” after the thunderous clap of the waves heard during high tide. It’s a truly spectacular sight and one that’s well worth the effort of reaching there.

Here’s the video of our adventure. 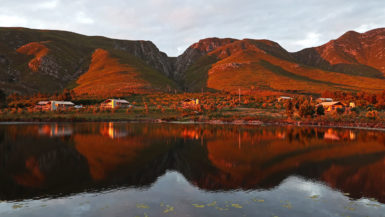